How to Stand-Out in a Group Interview

We won’t lie; group interviews can be a tad daunting. We all know that when you apply for a job you are going up against many qualified candidates, but it can be a tad nerve-wracking having to sit in a room with those candidates and compete with them face-to-face.

More and more frequently companies are using group interviews to find good applicants and speed up the interview process. With office dynamics and company culture becoming increasingly important to business owners and CEOs, group interviews are a great way for them to see how potential candidates interact in a group scenario and how to solve problems as a member of a team.

What is a group interview?

A panel interview may include multiple people from the business, including potential colleagues from the department you are interviewing for a position in, as well as managers and senior level individuals. However, you are the sole focus of the interview and the interviewers spend the time asking you questions and getting to know you.

A group interview, on the other hand, is where you are interviewed alongside several other potential candidates for the same position.

What can I expect from a group interview?

As a collective, you will likely be asked to answer a range of typical interview questions, but you may also be put to the test with problem solving or work-simulation exercises. An example from Workable advises interviewers to give candidates a LEGO project and ask them to build a tower with as few bricks as possible.

Remember the reason behind this style of interview is to see how you interact with others and solve problems on the spot. Your aim is to stand out from the crowd so that you can progress through the first round of interviewers and secure some one-on-one time with the hiring manager/decision maker. 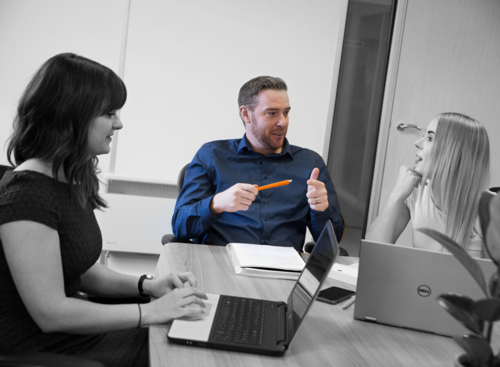 How can I stand out from the crowd?

An interviewer knows very quickly whether you will be a good fit for their business, so remember that your interview begins the second you walk in. Make sure that the first impression you give is the one that you want to stick because they usually do.

Make sure you give off friendly confidence, but not arrogance. If you’ve not been made aware that you’re doing a group interview, try to keep your shock/disappointment/surprise under wraps and take it in your stride.

Your response to the shock says a lot about you, including how you may interact with your future team and react to future surprises on the job.

While you may be surrounded by competition, remember they can help you progress to the one-on-one interview. During the group stage it is important to address other candidates by name and take a genuine interest in them, and why they’re there; this can help you appear like a natural leader.

It is also a good idea to build off of other candidates’ ideas. If someone gives a good answer to a question or suggests a positive solution to a problem, try following it up by addressing their response and adding your own thoughts.

Don’t forget, if the role you’re interviewing for involves teamwork with others, a group interview is the best way for employers to get a look at how you’ll behave as a possible employee. As important as it is to shine on your own, you must know how to play well with others.

One of the quickest ways to ruin your chances of securing that second interview is by not listening to the people/activates around you.

Pay close attention to what’s being said, by both your fellow interviewees and the hiring managers/decision makers conducting the interview. A big part of the group interview process is building off the talents and abilities of your team.

Drop them an email when you get home.

This is a pretty basic interview tip but follow up emails do matter. It’s pretty likely that every other person being interviewed will be following up with a thank-you message. It’s just as important to stand out at this stage of the possess as it is at any other.

Try referencing a part of the day in which you contributed well to the interview’ perhaps an interesting answer you gave or even a joke you managed to slip in. If it makes the interviewer remember your face in a positive way, it will benefit you.

Just remember; be prepared and don’t let group interviews catch you off guard! Don’t forget the basics, either. Good appearance, promptness, politeness, and research will help you tremendously to stand out among the other candidates.

You could potentially be interviewing with future managers, peers, and/or fellow co-workers so it’s a good idea to build solid, positive relationships early!